February marks a turbulent time in our nation’s history. The United States was built on the back of slaves, their free labor and it behooves us to remember that the success the United States has experienced came at an immense cost. In an effort to help us remember so that we do not repeat our bloody past, I wanted to share stories of people who suffered, and whose ancestors suffered before them, and yet still found the will and resolve to cut through and carve their own future. These people should be on our mantles and our televisions, not overpaid athletes or entertainers. We need to normalize POCs who overcame great adversity to become something better, so that they may inspire others to break through and achieve great things as well.

I had intended to interview my first guest and then rewrite the interview as an editorial. Upon reading the interview, I felt it would be much more powerful to read her story in first person. My first guest is my dear Aunt Jasmin Brown. She is a nurse with utilization review and discharge planning experience in multiple case management and clinical arenas including medical-surgical, telemetry, orthopedics, rehabilitation and psychiatry specialties as well as supervisory, charge, and team leadership roles with experience in mental and behavioral Health. Needless to say her expertise has helped many people throughout the years including veterans requiring Hepatitis C Therapy, and those with neurological and cardiological needs. She grew up with my mom in Chicago but her story begins in Alabama.

“My grandmother had a brain tumor removed before I was born. Because she was colored and in Alabama, there was no rehab for black folks in those days. As a result, her right hand and arm atrophied. She was forced to leave her career, in which she took so much pride, as a home economics teacher. There were no disability benefits from the Colored Board of Education either. With a lot of time on her hands, my grandmother taught me to read. When I was three years old, I was accompanying my Aunt Fanny to her one room school, where she taught grades one through three. Our books were hand me downs from the white schools. As a respect, we learned to make sleeves for them out of cloth or paper bags; so valued they were. I was then good enough to begin first grade at age four at Jameswood School in Tishabee, Alabama

Our teachers were so tough and demanding on us. No noise, no playing in class, no sass, every greeting was with a handle of Mr. or Mrs. Our lady teachers also wore almost Sunday dresses. Our male teachers always wore suits if not shirts and ties. We knew our places of reverence and ended our sentences with ‘Yes Maam, No Maam, Yes Sir, or No Sir.”

Education in the very segregated south was considered a high holy responsibility lest we grew up to be nothing and bring shame to our families and our race. We were always cognizant of our slave ancestry, and the sacrifices their lives had been. Additionally, in our county, the Ku Klux Klan was a fearful force that our men fathers and uncles and brothers lived alongside of, if not under the influence by. The owner of the grocery store or drug store would greet our elders on the day of trade which was Saturday, with a “ Ed, how you doing today? What can I get for you ? You want me to put it on your bill?” The response was “ Oh I’m well Mr. Tuck, thank you suh, and yes suh, please suh, and thank you.” Because it was known that this very benevolent merchant was the head of the KKK and he could not be crossed or ever challenged. But our fathers, and men folk, gritted their teeth and clenched their jaws quiet tight, as they tipped their hats and we would depart town after the weekly trading was done. Set against this background, in our homes. We spoke very respectfully with class and education. In those days as I look back, it seems as though when you went to first grade, it was the first day of the journey to graduate to attend college, trade school or go to the military. High school graduation was the least of which was demanded those many decades ago.

Emergence from my segregated southern roots into the northern Chicago education of integration, unnerved me. My classmates were literally yellow, black, red, brown, white. I had never seen nor known such a world. I thought that I should step off the sidewalk to let them pass by, so ignorant of this new world was I. Quickly, as though divined, one white German Irish classmate, Kathy McSloy and her cafe au lait Filipina best friend Chris Tamani, gravitated to this country bumpkin, took her in, loved her, became one with her and her world and she did the same in kind. Demanding Dominican Nuns exacted excellent academics at our school, in addition to an elevation of social consciousness in those stormy sixties of freedom rider lynchings, beatings, KKK church bombings, hell and division in the Southern United States. 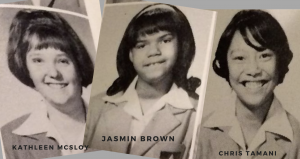 My northern turnaround about white people came from my German Irish friend’s mother, Helen McSloy. Appalled, as she later said, that people in her own country were denied their constitutional rights to vote, she withdrew my friend from class and traveled by bus to demonstrate quietly and firmly in solidarity for the civil rights of my people, in that great historical march to Selma, Alabama along with Dr. Martin Luther King. 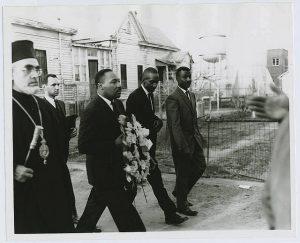 Her mother’s courage gave me courage. My partially paralyzed grandmother’s example of integrity and absence of bitterness about her life gave me courage. This foundation, these women who never met one another; a blended southern woman a descendant of African slaves, a German blue eyed Caucasian woman, both fearless exalted by the power of compassion and love are the dominant figures of early influence on how I later patterned my life. When looked down on, because of the color of my skin, I remembered the nurturing of my German mother figure. Because of her lack of fear, I joined demonstrations for civil rights and SNCC in Chicago before leaving high school. When challenged with “you not good enough, to take a place amongst the best of society, you don’t have the right class or color, you don’t have what it takes ” I closed my eyes to see my sweet determined grandmother cleaning her house and cooking, learning to drive all over again, using her left hand and left side, and teaching me at home though partially paralyzed on her right side. I graduated high school, and was awarded a scholarship to a prestigious women’s college in an exclusive Chicago Suburb. Remaining so influenced by the times, I used my voice to join as a force of my generation to bring about the best of ending the American involvement in a war, and participated in many committees, drives, marches, programs, sit-ins, jail-ins so that all classes and colors would have their voting rights.

By the time that I had children and was a single parent, I still had not reached my educational goals. I felt so ashamed. It took many, many years to complete my college education. Yet I always remembered the fearlessness of Miss McSloy and my grandmother. Memories of the brutal segregated south and race hatred which whispered, “…see, you are nothing after all” made me just hungry enough to prove that theory wrong. When all obstacles of poverty and lack of friends and family support cried out that I should give up and go on welfare and stay there, the spirits of those women drove my youth and carried me to maturity; to see within me, for I was worthy.  My character gifts of dignity and self-pride gave birth to a burgeoning confidence. I could not lay down. I did complete nursing school, then undergraduate school and post graduate school, way into my mature years. Although I felt like giving up, I could not. Those women [They] were the models, the embodiment of relentless perseverance of worthwhile goals.

I want all girls, women, boys and men of all colors to know that we are mighty and no one is better than you are. If you have to eat mud, change our perspective to see that you are getting pure minerals. If you have to work three jobs to make it with no sleep, you will sleep enough once your life on earth is done. What you are, your heart and strong drive to keep going, will be your best friend. It is not as important where and how you start, but what you do with the path, and where you end up. Mark not what others around you are doing, or how they are falling of the tracks. Do not follow them. Love yourself, your unique you. Treat others the way you desire to be treated. You are the only runner in this race, and yours is the victory if you never give in, never give up.”

Thank you Aunt Jasmin for your time and readers for tuning in. Be on the lookout for my next featured guest coming soon.